This ability is obtained from the fourth tier of the Lords of Hell set. It available between August 26th 2011 - August 31st 2011 and is found on the Facebook platform.

Astaroth, in demonology, is a crown prince of hell. He is depicted as a man with feathered wings, wearing a crown, holding a serpent in one hand, and riding a beast with dragon-like wings and a serpent-like tail.

Astaroth has been depicted in many times in popular cuture in many different forms. 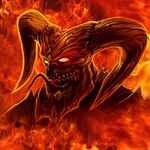 Wikipedia has an article about:
Astaroth
Community content is available under CC-BY-SA unless otherwise noted.
Advertisement