This ability is obtained from the first tier of the Lords of Hell set. It available between August 11th 2011 - August 31st 2011 and is found on the Facebook platform.

In demonology, B'alam, also Balaam, is a great and powerful king of Hell who commands over forty legions of demons. He gives perfect answers on things past, present, and to come, and can also make men invisible.

Balam is depicted as being three-headed. One head is the head of a bull, the second of a man, and the third of a ram. He has flaming eyes and the tail of a serpent. 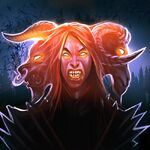 Wikipedia has an article about:
Balam
Community content is available under CC-BY-SA unless otherwise noted.
Advertisement