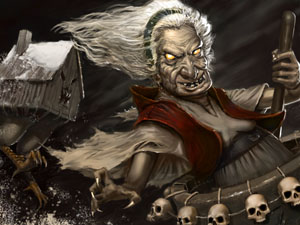 Boss Fight - Showdown with Baba Yaga is currently the only boss mission in the game, and is found in the Fledgling tier.

Baba Yaga has been overstepping her boundaries and stealing your turf from under your fangs. She needs to be taught a lesson; that there's only room in this town for one supernatural night creature. Take her out before she gains momentum and envelops the entire town with her witchery.

It requires 20% of your max energy, as well as one Vampiric Claws and one Enhanced Senses. On completion, it rewards a variable amount of blood, experience points and provides a possible rare ability from three possible results: Cat's Grace, Eagle Eyes and Control Bear Clans.

It should also be noted that the risk, as well as the rewards steadily decrease each time you successfully outclass this wannabe witch. After all, you only NEED to prove yourself a superior stalker of the night once. After that its just farming experience, blood, and abilities.

Before Vampire Wars got its "New Look," Baba Yaga used to look like this: 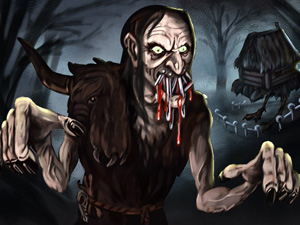 Baba-Yaga is likely inspired from a witch in Slavic folklore with the same name. According to legend, she flies around in her cauldron (large cooking pot), kidnaps and eats small children in a hut which stands on chicken legs. This Iconic hut will danced in a circle attacking all who nears it until it hears the precise poem where it will 'roost' until the occupant leaves. In most Slavic folk tales she is portrayed as an antagonistic being. However, some characters in other folk stories have been known to seek wisdom or knowledge from her.