This article is a stub. You can help Vampire Wars Wiki by expanding it.

Dracula is an event similar to the The 4 Horsemen challenge. It will require Primal Blood and may have more than one mission. Dracula acts as a mentor in this event. You are most likely to get primal blood in ancient vampiric chests as well as gifting them currently. You can ask your friends (Reverse Gifting) for Primal Blood (up to 32 requests per day, IMPORTANT: You cannot send Primal Blood or any gifts if you use the game to request your friends for Primal Blood). You can also Ask For Help and Share Reward to let your friends gain Primal Bloods (every time they click you gain 2%, you can receive help this way 5 times a day). Once you have revived Dracula to 100% you can reset the mastery for 30 favor points, giving you another 10 days to finish the Mission. 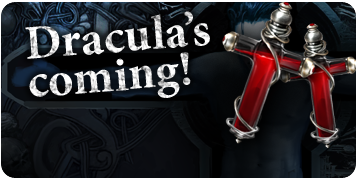 Dracula's lost tomb has been uncovered. However this is not his final resting place. The player must search high and low for vials of Primal Blood in which to revive Dracula. Upon awakening Dracula immediately sees you as his pupil. Through muttered words and without example, you begin to grasp his concepts. As you pour more and more of the blood into his body, his strength regains and he is able to teach you more. When he is at his full strength, he is able to teach you the last that he knows. You walk away stronger, and Dracula is free to instill terror once more.

Several weeks after the Event ended, the Dracula missions reset for a 24-hour period which allowed users with leftover Primal Blood to try again. Users could also pay Favor points too.

Count Dracula is a fictional character, the titular antagonist of Bram Stoker's 1897 Gothic horror novel Dracula and archetypal vampire. Some aspects of his character may have been inspired by the 15th century Romanian general and Wallachian Prince Vlad III the Impaler, also known as Vlad III Dracula. In the United States the character became public domain in 1899 and consequently appears as inspiration for characters in all manner of popular culture such as movies, television shows, and even a breakfast cereal.

Wikipedia has an article about:
Count Dracula
Community content is available under CC-BY-SA unless otherwise noted.
Advertisement