The Dublin (event) was a multi-chapter Event similar to New York. It required the Mission Item Shamrocks. You have 24 days to complete the chapters. If you master a chapter before the timer expires you can reset it for (10 or 15?) favor points and earn additional abilities. The event began on March 22nd 2011 and ran until April 15th(?) 2011. 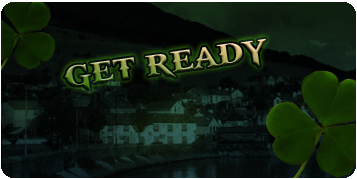 
It is forbidden by Us – a vampire consorting with a human. And now, there is news that a child has been born!

You have been chosen to bring this child safely back to Akem Manah – for He will decide its fate. But Morrigan, the goddess of battle and strife, has taken a special interest in this little bundle of pure, unadulterated evil. Beware of her machinations.

Players can travel through the portal to Dublin to search for the missing Infant. Unlike other portals, no key is required to enter Dublin.

You remember Christof. You remember the day he was turned into a vampire. All those nights the two of you spent feasting on young blood – the rage, mayhem and lust – all fueled by your hatred of humans. And then he went off the reservation.
Completing this chapter earns the ability Vampire Smarts.

Celia. Christof's Celia. Her crumpled body, the blood on her clothes – intoxicating! But the fear in those eyes – it stirs a memory. You remember that fear ... the loss of someone precious.
Completing this chapter earns the ability Pathfinder.

They snarl at you. They know you are evil. But they are proud, and will guard their territory in the absence of their mother. You lick your fangs. Tigers were always your favorite animals.
Completing this chapter earns the ability Ambush of Tigers.

The Ha'Penny Bridge across the Liffey. You stand on top of it and ask yourself – why were bridges built? Not to help people cross over. No. They were built to protect them from the evil underneath. Why was the child brought to a place like this?
Completing this chapter earns the ability Water Strider.

The sins of the father shall be visited upon the son. And Christof had sinned. He had embarked on a fool's errand – an ancient and powerful fool.
Completing this chapter earns the ability Balor's Evil Eye.

The undead shouldn't chase dames – especially dames with legs that go on forever. Morrigan – the goddess of battle, strife and... fertility. What was Christof thinking? The child now belongs to her. Akem Manah will not be happy!
Completing this chapter earns the ability Animate Tattoos.

Mastery of all chapters earns the ability Conceive Wickedness.

The Dublin portal re-opened for twenty-four hours on April 19th 2011. Players with leftover Shamrocks were allowed to finish any incomplete missions. Players could also restart any finished missions or buy Shamrocks from the Elders using favor points, however they could not buy from the Collector using Blood.

Wikipedia has an article about:
Dublin
Community content is available under CC-BY-SA unless otherwise noted.
Advertisement