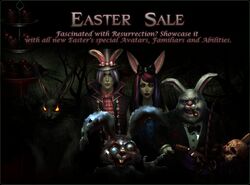 The Easter Sale was a 72-hour Sale that took place between April 6th - April 9th 2012. The majority of the sale revolved around Elder and Ancient's Workshop Abilities sold at discount prices or in bulk for Favor Points. Other purchasables include 3 new Easter's Bunny set Familiars * available only during the sale, and the new Easter set Avatar *.

These Abilities could be purchased individually or in a set of three. The Abilities stayed the same during the entire sale. A second set of abilities was available on day two of the sale as well.

Every fours hours 1 new Bundle would appear, replacing the previous Bundle. Each Bundle appeared only once and were only available in the Base Game.

The Easter Avatars were introduced during the sale; the

Fascinated with Resurrection? Showcase it with all new Easter's special Avatars, Familiars and Abilities.