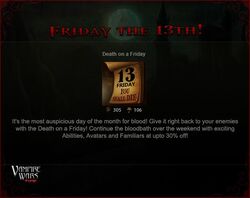 The Friday the 13th Sale was a 72-hour Sale that took place on Friday July 13th - July 15th 2012. The majority of the sale revolved around new and old Elder Abilities, Avatars, and Familiars sold for Favor Points.

Two new Abilities could be purchased only available during the sale.

Every 3 hours one new Elder Ability would be on sale for various Favor Points. After 180 minutes a new Ability would appear, replacing the last one. Another section of the page gave hints on the next ability such as Ability Type, Attack, and Defense, and were available in the Base Game.

Throughout the sale, several Avatars were on sale.

It's the most auspicious day of the month for blood! Give it right back to your enemies with the Death on a Friday! Continue the bloodbath over the weekend with exciting Abilities, Avatars and Familiars at upto 30% off!

Friday the 13th is considered unlucky by the superstitious, especially when it falls in October. It is also a series of horror films that revolve around serial killer Jason Voorhees or the teenagers of Camp Crystal Lake.