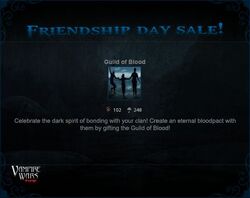 The Friendship Day Sale was a 72-hour Sale that took place between Friday August 3rd 2012 and Sunday August 5th 2012. The majority of the sale revolved around Abilities and Familiars sold for Favor Points.

Several retired sets of Familiars were made available again during the sale, giving players a second chance to get ones they might've missed the first time. Every six hours a new Set would appear, replacing the last Set.

Every few hours 1 new Bundle would appear, only a few bundles were available. Each Bundle appeared only once. There were no bundles available on the second day of the sale.

Calling for the demons of darkness!! Celebrate the Friendship's Day by strengthening your bond with your clanmates. Get this Limited Edition Special Ability Guild of Blood and gift your clan to make the bloodpact stronger than ever!!

Celebrate the dark spirit of bonding with your clan! Create an eternal bloodpact with them by gifting the Guild of Blood!

On 27 April 2011 the General Assembly of the United Nations declared[5] 30 July as official International Friendship Day. However, some countries, including India,[6] celebrate Friendship Day on the first Sunday of August.

Wikipedia has an article about:
International Friendship Day
Community content is available under CC-BY-SA unless otherwise noted.
Advertisement