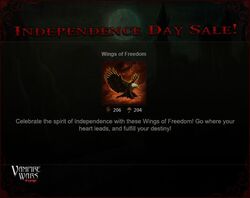 The Independence Day Sale was a 72-hour Sale that took place on Friday June 29th - Sunday July 1st 2012. The majority of the sale revolved around Abilities, Familiars and Avatars sold for Favor Points.

.
After 120 minutes a new Ability would appear, replacing the last one. Another section of the page gave hints on the next ability such as Ability Type, Attack, and Defense, and were available in the Base Game.

Several retired sets of Familiars were made available again during the sale, giving players a second chance to get ones they might've missed the first time. Every six hours a new Set would appear, replacing the last Set.

Every few hours a new Avatar set would be available.

July 4th is on its way and freedom is in the air. Vampires are the owner of their soul and no limits can define them. Emerge like a free soul and let no barrier hold you back from becoming the strongest Vampire in the dark world. Celebrate this freedom and grab these amazing Avatars, Familiars and Abilities and become infinitely powerful!!