This ability is obtained from collecting the other 4 Abilities in the Lords of Hell set. It available between August 26th 2011 - August 31st 2011 and is found on the Facebook platform.

Traditionally, Lucifer is a name that in English generally refers to the devil before being cast from heaven. In Latin, from which the English word is derived, Lucifer means "light-bearer."

Lucifer was an archangel, light-bearer, and one of God's most beloved. Lucifer refused to worship man as God's greatest creation and sought to put himself above God. As a result he was cast down to hell by God and brought one third of the heavenly host (angels) with him. These other fallen angels became the demons of hell. 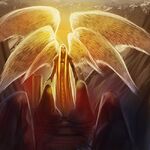 Wikipedia has an article about:
Lucifer
Community content is available under CC-BY-SA unless otherwise noted.
Advertisement