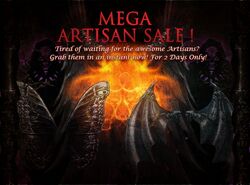 The Mega Artisan Sale was a 48-hour Sale that took place between Saturday June 16th - Sunday June 17th 2012. The majority of the sale revolved around Artisans sold at discount prices.

One new Ability could be purchased from the Elders only during the sale.

Tired of waiting for the awesome Artisans? Grab them in an instant now! For 2 Days Only!