Old Blood is the first City in Vampire Wars. The player is sent backwards through time into the medieval Age of the Eternals on an epic quest to save the world of Vampires. In this alternate dimension the player is given a chance to complete new tasks and earn new rewards, with hopes of unraveling the conspiracy and preventing future disaster.

While inside Old Blood the player is stripped of their Base Game Abilities and Blood, and must gather new Abilities and Old Blood (money). It is also necessary to have Hourglasses to complete Missions. A continuous sound loop also plays, introducing music to the game for the first time. 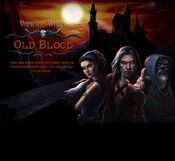 By completing the 3 pre-event tasks, the player was given a chance to meet three of the main characters before the time-rift opened. These tasks could be done in any order and became available on June 16th 2011. Once the tasks were complete, the players could start requesting Hourglasses.

Old Blood was rolled out over the course of several days between July 6th - July 9th?, giving some players early entrance. It appears that players were chosen at random; completing the pre-travel tasks didn't affect which players were chosen.

Players must be at least level 10 to enter the time-rift. All Missions require a number of Hourglasses which are consumed on use.

Completing Old Blood missions do not count towards Trophies or the Induction in the Base Game, or points towards RewardVille.

There was a time before the Elders, when the Eternals walked the earth. This was the age of Old Blood.

Are you prepared to travel back in time and defend your kind against the darkest dawn of them all?

Are you ready to face the dangers that lurk in the depths of an ageless forest? Be prepared to take down the fiercest warrior of them all.

As the gates to the castle draw open, the last of the Eternals rides forth. All vengeance and fury will break loose as you face the heir to the age of Old Blood.

Add a photo to this gallery

Retrieved from "https://vampirewars.fandom.com/wiki/Old_Blood?oldid=15536"
Community content is available under CC-BY-SA unless otherwise noted.