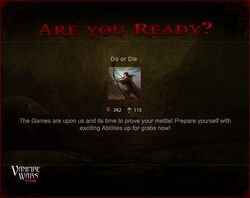 The Olympics Sale was a 48-hour Sale that took place between Friday July 20th 2012 and Saturday July 21st 2012. The majority of the sale revolved around Abilities sold for Favor Points.

Every 2-3 hours one new Elder Ability would be on sale for a discounted price.
Another section of the page gave hints on the next ability such as Ability Type, Attack, and Defense, and were available in the Base Game.

Calling all Vampires! Are you ready make your foes go green with envy? Here’s your chance to arm yourself against your enemies, by grabbing exclusive new abilities, avatars and familiars at the Olympics Sale! Hurry, you don't want to miss out on this one!

The Games are upon us and its time to prove your mettle! Prepare yourself with exciting Abilities up for grabs now!

The Olympic Games is a major event around the world. A series of summer and winter games that represent every nation in the world. The Olympics are held every four years during their respective season.

For the majority of the first day of the sale, there were no Lightning Sale Abilities available.