The Pandora (event) was a single-mission Event similar to Feed Santa's Starving Reindeer. It required the Mission Item Ambrosia. You have 10 days to complete the mission. If you master the mission or the timer expires, you can reset both for 30(?) favor points and earn additional abilities. The event began on October 19th 2010 and ran until (?). 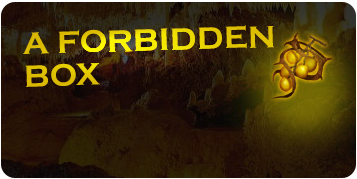 The mysterious woman Pandora owns a powerful box full of wild energy which she has kept hidden from the gods for millenia, and you desire it's contents. She is very skeptical of your motives and it's your job to convince her to share it's contents. Fortunately, she has a sweet-tooth for Ambrosia and you will provide it for her favor. Once Pandora opens the box you earn the power trapped within.

According to Greek mythology Pandora was the first woman in creation. After the theft of fire by the human Prometheus the Greek gods decided to send Pandora "gifts" as a form of punishment for humans. Aphrodite gave her beauty, from Hermes she received persuasiveness and from Apollo, music. Finally, the god Zeus gave her a "pithos" or a jar that she was ordered to never open under any circumstances. The jar, sometimes depicted as a box, contained all the evils of the world. Pandora, far too curious, opened the jar and released plague, despair, and a myriad of evil upon the world. Panicked, Pandora quickly closed the jar trapping only one thing inside, hope. The myth is used as an explanation of why there is wickedness and corruption in the world.

The term "opening Pandora's Box" is used as a metaphor to describe someone who is creating something negative or a terrible situation that cannot be undone.