The Red Friday Sale (December) was a 24-hour event on Friday December 3rd 2010. The majority of the sale revolved around Limited Edition, Event, retired Gift, and Mission Abilities sold at discount prices for Favor Points. There were also 4 new Abilities on sale, 5 new Blood God Gamble Abilities, 3 new Lion Familiars, and a new Red Tech Avatar set, all of which were only available during the sale. 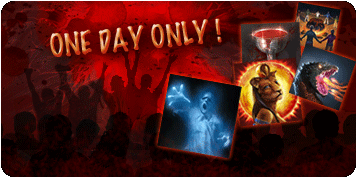 Four new Abilities were available only during the sale.

These Abilities were available all day, purchased individually or in a set of 3.

The bundles were only available later during the sale. Every three hours, 2 new Bundles would be on sale, replacing the previous 2 Bundles. It should be noted that these bundles are almost identical to the ones used in the last sale.

Every hour 1 new LE or Event Ability would be on sale for 60 minutes, replacing the last Ability. There was also clues for the next ability such as Ability Type, Attack, and Defense.

* This is the only Mission Ability that was on sale.

The Tokyo Event reopened for the 24-hour sale.