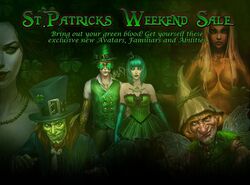 The St. Patrick's Weekend Sale was a 48-hour Sale that took place between March 17th - March 18th 2012. The majority of the sale revolved around Elder and Ancient's Workshop Abilities sold at discount prices or in bulk for Favor Points. Other purchasables include 6 new Elder Abilities and 3 new Paddy's set Familiars available only during the sale, and the new Dubliner set Avatar.

Every fours hours 1 new Bundle would appear, replacing the previous Bundle. Each Bundle appeared only once and were only available in the Base Game.

The Paddy's Familiars could be bought for the price of 60

The Dubliner Avatars were introduced during the sale; the

. They can still be purchased after the sale. (?)

and that the discounted cost was 240

. This was simply an advertising glitch. As if you purchased each familiar separately from the Avatar Shop, the cost was 60

respectively. Which equals out to a cost of 240

to purchase all of the familiars. This is similar to the original cost of the Basilisk set.

Bring out your green blood! Get yourself these exclusive new Avatars, Familiars and Abilities.

Calling all Vampires! Are you ready make your foes go GREEN with envy? Here’s your chance to arm yourself against your enemies, by grabbing exclusive new abilities, avatars and familiars at the St. Patrick's Weekend Sale! Hurry, you don't want to miss out on this one!