"The Four Horsemen of the Apocalypse are beginning to stir. The seals that bound them since the dawn of time have been broken. Do you have what it takes to defeat them before the world falls?" 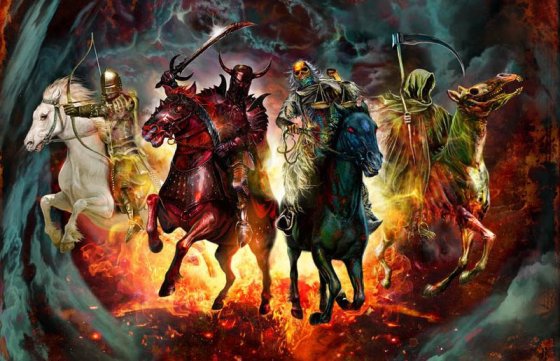 You have 9 days to defeat each horseman, respectively, otherwise there is a cost of 30 Reward Points to reset the clock.

You can fight the horseman once per 24 hour period for 10% mastery. Each clan member that helps you with the mission adds an additional 2% mastery to defeating that horseman.

"The Conqueror has arrived! The first messenger of the Apocalypse must be stopped before it's too late."

"I watched as the Lamb opened the first of the seven seals. Then I heard one of the seven living creatures say in a voice like thunder, "Come!" I looked, and there before me was a white horse! Its rider held a bow, and he was given a crown, and he rode out as a conqueror bent on conquest." —revelation 6:1-2

The white horse has been depicted as representing either evil or righteousness.

"War has descended upon Earth and you have limited time to step up to his challenge."

"When the Lamb opened the second seal, I heard the second living creature say, "Come!" Then another horse came out, a fiery red one. Its rider was given power to take peace from the earth and to make men slay each other. To him was given a huge sword." —revelation 6:3-4

The rider of the second horse is often taken to represent War. His horse's color is red. In some translations, the color is specifically a "fiery" red.

"Famine has followed War and is bringing pain and suffering with him. Hurry, you only have limited time to defeat him."

"When the Lamb opened the third seal, I heard the third living creature say, "Come!" I looked, and there before me was a black horse! Its rider was holding a pair of scales in his hand. Then I heard what sounded like a voice among the four living creatures, saying, 'A quart of wheat for a day's wages, and three quarts of barley for a day's wages, and do not damage the oil and the wine!' " —revelation 6:5-6

The third horseman rides a black horse and is generally understood as Famine. The horseman carries a pair of balances or weighing scales, indicating the way that bread would have been weighed during a famine.

"When the Lamb opened the fourth seal, I heard the voice of the fourth living creature say, 'Come!' I looked and there before me was a pale horse! Its rider was named Death, and Hades was following close behind him. They were given power over a fourth of the earth to kill by sword, famine and plague, and by the wild beasts of the earth." —revelation 6:7-8

The fourth and final horseman is named Death. Of all the riders, he is the only one to whom the text itself explicitly gives a name. Still others apply the names "Pestilence" or "Plague" to this horseman, based on alternative translations of the Bible. Unlike the other three, he is not described carrying a weapon/object, instead he is followed by Hades.

The Four Horsemen Come Back

Several weeks after the Event ended, the Horsemen returned for a 24-hour period which allowed users with leftover Apocalypse Seals to finish any incomplete battle(s) with any of the Horsemen. Users could also pay Favour points too.