This ability is obtained from the Elders for 35

This one will have your enemies stunned speechless as the blood in their brains goes bust. A joke which will blow their minds off.

The Killing Joke was the name of new-wave band which became popular during the 1980s. 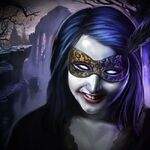